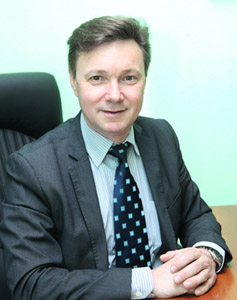 Head of the Department of Clinical Immunology and Allergology with the Department of Medical Genetics of the O.O. Bohomolets National Medical University.
Expert of the Scientific and Expert Council of the State Expert Center of the Ministry of Health of Ukraine. Member of European and American Academies of Allergy and Clinical Immunology.
Vice-president of the Ukrainian Society of Immunology Specialists in Allergology and Immunorehabilitation (UIAI).
Author of 2 textbooks, 3 manuals, 5 training programs, more than 200 scientific papers.
KURCHENKO Andriy was born on January 29, 1965 in the capital of Bukovyna, – Chernivtsi, in a doctor's family. In 1982 he graduated with honors from high school and in the same year he entered the first year of Chernivtsi Medical Institute, medical specialty. From the first courses of study at the institute, he is actively interested in dermatology at the Department of skin and sexually transmitted diseases, which at that time was headed by the daughter of famous Ukrainian dermatologist, Professor Albina Buharovich. After graduating with honors from the Chernivtsi Medical Institute, the Academic Council of the educational institution gives a recommendation to Andrii Kurchenko for scientific work in his native institute. But he wants to continue his studies and goes to Kyiv for distribution. In September 1988, he entered the clinical residency at the Department of Skin and Venereal Diseases of the Kyiv Institute for the Advancement of Physicians (KIAP). At that time, it was headed by a prominent Soviet dermatologist, founder of the relevant Ukrainian school, Professor Boris Hlukhenkyi (1925–2015), whose name was associated with the first professional steps of A. Kurchenko. At the Department of Dermatovenereology, a young ambitious team gathered around Professor Hlukhenkyi. Together with the resident Andriy Kurchenko, the future public figure and professor of dermatovenereology Olha Bohomolets studied here, and the assistant of the department was the future professor of the University of California, Serhiy Grando, with whom he had lasting friendly relations. In the late 80's, the main focus of the department was immunodermatology, which prompted young scientists to master new science.

After completing his clinical residency in 1990, Andriy Kurchenko continues his postgraduate studies at the Department of Cutaneous and Venereal Diseases at KIAP. For three years, in parallel with dermatology, he persistently mastered modern clinical and molecular immunology, whose enthusiasm goes into the work of a PhD thesis dedicated to the study of the immunopathogenesis of eczema - the most common allergic skin disease. The implementation of a large immunohistochemical fragment of the dissertation is joined by a second scientific supervisor, a well-known Ukrainian pathomorphologist, the head of the Department of pathological anatomy (KIAP), Professor Valerii Silchenko. Under the guidance of Professors Hlukhenkyi and Silchenko, in 1993, A. Kurchenko successfully defended his Ph.D. thesis.
After dissertation, A. Kurchenko works as an assistant at the Department of Skin and Venereal Diseases, and from 1995 to 1997 combines teaching with scientific activity as a senior research fellow at the KSIAP Research Center. In 1995, he completed an internship in the dermatology clinics in London and Birmingham. In the course of performing a fragment of a joint scientific work in 1989, A. Kurchenko met with another prominent personality - the head of the department of immunology of the Institute of Urology and Nephrology of the Academy of Medical Sciences of Ukraine, Professor Heorhii Drannik, whose life and activity are connected all subsequent years. In 1994, the first Department of Clinical Immunology and Allergology was established at the National Medical University named after O.O. Bohomolets under the guidance of Professor H. Drannik, and teaching of this subject was started in all higher medical institutions of the undergraduate level. In picking up young staff, Professor Drannik in 1997 invited A. Kurchenko to go to work at the newly created department. Since then, he has been actively involved in the development of the department and the creation of a modern service for clinical immunology and allergology of Ukraine. He actively works in the ranks of the Ukrainian Society of Specialists in Immunology, Allergology and Immunorehabilitation (UIAI), established in 1998.
In 2001, during the organization of the first international school of young scientists in Ukraine under the direction of UIAI, EAACI and AAACI (European and American Societies of Immunologists and Allergists), A. Kurchenko met a famous scientist, professor at Harvard University, director of the Institute of Research England (IRINE) Lawrence Du Basque. Under the active patronage of Professor Du Basque, a large number of scientific researches were carried out, which became the basis for the doctoral dissertation of A. Kurchenko, and further defined the whole further scientific direction. In 2005, having received the corresponding title, A. Kurchenko occupies the position of associate professor of the Department of Clinical Immunology and Allergology with the Department of Medical Genetics of the O.O. Bohomolets Medical University.
In 2008, Andrii Kurchenko defended his PhD thesis on "Atopic dermatitis: a characteristic of changes in systemic and local immunity", which he worked on for over ten years. After defending his thesis, A. Kurchenko became a co-author of 2 textbooks, 3 manuals and 5 work-study programs, author of more than 200 scientific papers. He has higher professional categories in the medical specialties: clinical immunology, allergology, as well as relevant qualifications in the specialties: dermatovenereology, molecular genetics and health care organization.

Since 1998 A. Kurchenko – Deputy Editor-in-Chief of the leading professional journal "Immunology and Allergology: Science and Practice". Member of two specialized scientific councils in the field of immunology and allergology. Since 2012 – expert of the Scientific and Expert Council of the State Expert Center of the Ministry of Health of Ukraine. Member of European and American Academies of Allergy and Clinical Immunology. Member of the Ukrainian Association of Dermatovenereologists and Cosmetologists. In 2011, Professor A. Kurchenko was elected Vice-President of the Ukrainian Society of Specialists in Immunology, Allergology and Immunorehabilitation (UIAI). In 2012, he was elected like a Head of the Department of Clinical Immunology and Allergology with the Department of Medical Genetics of the Bohomolets NMU. From 2012 to 2014, he holds the post of Head of the Postgraduate Department, and since 2015 he chairs the Academic Board of Theoretical Medicine at the O.O. Bohomolets National Medical University and is a member of the Scientific and Coordination Council of the University. After being transferred to the Department of Clinical Immunology and Allergology in 2007, the department of medical genetics, A. Kurchenko began to actively master the specialty known to him – molecular genetics, setting himself the ambitious task of combining modern knowledge of immunology and genetics of skin diseases. The development of this new trend in modern dermatology is devoted to the latest scientific research by Professor A. Kurchenko.
In the framework of the intergovernmental agreement between Ukraine and the People's Republic of China in 2018, an agreement on full cooperation was signed between the Head of the Department of Clinical Immunology and Allergology with the Department of Medical Genetics of O.O. Bohomolets NMU, Professor A. Kurchenko and the company BoZhun. BoZhun Group is one of the ten largest Chinese companies specializing in providing quality medical services in dermatology, neurology, psychiatry, medical rehabilitation and more. With a huge network of specialized clinics throughout China and beyond in Southeast Asia, the company actively invites the renowned professors and consultants in the field of Chinese traditional medicine from university clinics in China, as well as renowned Western scientists and specialists from Europe, USA, USA Australia and New Zealand. The purpose of the collaboration of Professor A. Kurchenko with the company BoZhun is a great clinical work in combination with reading a series of lectures on topical issues of pathogenesis, diagnosis and therapy of immuno-dependent skin diseases. The agreement also provides for a large number of joint consultations of patients, consultations with medical staff of specialized clinics on topical issues of the application of modern molecular biological methods of diagnosis of immunological diseases, discussing the results of treatment of patients with the use of local and systemic methods of immunosuppression and in various combinations of Western and traditional Chinese medicine.

In 2019, Professor Kurchenko A. and the BoZhun Group Company signed an agreement on scientific and advisory cooperation with the "Prevention and Therapy Research Institute" (Guangzhou City, Guangdong, PRC), which opens a new opportunity for engagement, planning and implementation scientific projects in the field of modern medical science and biotechnology.

At the end of 2019, Professor Kurchenko was honored with the All-Ukrainian Oriental Medicine Association Award for building a cooperative relationship between Ukrainian and Chinese traditional medicine.