DANNIK GEORHY MYKOLAYOVYCH
Doctor of Medical Sciences, Professor, Head of the Immunology Laboratory at the State Institute of Urology of the National Academy of Medical Sciences of Ukraine, Professor of the Department of Clinical Immunology and Allergology with a course on Medical Genetics of the National Medical University named after O.O. Bogomolets. 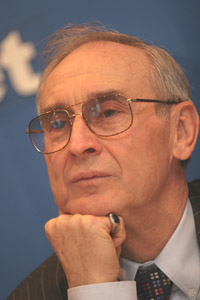 Georhy Mykolayovych Drannik was born on March 16, 1941 in Uman, in the family of government-enlisted air force commander, fighter squadron commander, Nikolai Drannik, who died on June 25, 1941, protecting his country, and his wife. After finishing high school in 1958, he was accepted into Kharkiv Medical Institute, where he studied on Therapeutic (Curative) faculty. His medical years came at the time when prominent professors, scientists and educators like G.L. Derman, A.M. Utevsky, D.O. Alpern, I. I. Grischenko, E.A. Popov, V.O. Belousov, M.M. Solovyov, L.T. Mala, and others, who made worthy contributions to the development of science and medicine in Ukraine, worked within the walls of Kharkiv Medical Institute. Here, for the first time, he discovered his interest in science. In 1965, after graduating with honors from the Kharkiv Medical Institute, G.M. Drannik received an offer from academician L.T. Mala to continue his post-graduate training at the Department of Hospital Therapy at the medical institute. However, by then, in his hands, Georhy Mykolayovych already held an assignment letter for Kiev region, and in his heart - the desire to work in biochemistry, and he left Kharkov.

Having worked for three years as a chief of the biochemical laboratory in the clinical sanatorium "Koncha-Zaspa" (Kiev) provided him with considerable practical training. And in 1968, G.M. Drannik began his post-graduate studies at the newly formed Research Institute of Kidney and Urinary Tract Disorders of the Ministry of Health of Ukrainian SSR (currently the State Institute of Urology of the National Academy of Medical Sciences of Ukraine). At that time, the Ministry had set the task for the Institute: to develop a kidney transplant program and implement it in the practical health care of Ukraine.

The young aspirant engaged in the development of this program, following the initial work done by Professor Y.Yu. Voroniy in the fifties, with encouraging results. Under the guidance of Prof. A.V. Sokolov, Drannik G.M. began working on his dissertation in pursuit of the scientific degree of a Candidate of Medical Sciences. The theme of his work was "Kidney allografting on the background of autoimmune glomerulonephritis".

While studying the mechanisms of allogeneic kidney rejection and the possibility of immunosuppressive interventions on them, the following novel data were obtained indicating that: (i) autoantibodies to the renal tissue are the cause of acute and/or chronic rejection of a transplanted kidney; (iI) the mechanism of rejection is based on the development of disseminated intravascular coagulation, leading to microvascular obstruction in the kidney allograft; (iiI) a reliable sign of rejection is the presence of breakdown products of fibrin/fibrinogen in the urine. Furthermore, the summation, synergism, and antagonism of immunosuppressive compounds were also described and the formula of their dose calculations, together with the algorithm for monitoring their adequacy and effectiveness, were also created along with the first domestic panel of HLA-type sera. As a result, a new research area into the link between HLA phenotype and the disease susceptibility had been launched in Ukraine.

In April of 1986, the whole world was overwhelmed by the Chernobyl nuclear disaster. G. M. Drannik remembers: "The first days’ impressions - general confusion, and especially - in medicine."
It was not until in December of 1986 that the first conference was held to discuss the preliminary results of the impact of the accident on the victims’ health. However, the immunologists attending this conference were not given an opportunity to speak. At that time, many well-known immunologists had already begun experimental and clinical research in their workplace, and it became clear that what people were being told from the podium was simply not true.

Even if ionizing radiation by itself did not have such a strong negative impact on health, the ignorance and excuses, the lies, and the stress that people were living in - all of these did significantly affect the immune system of people in Ukraine. He then spoke about it in Moscow, at the Institute of Biophysics, at one of the first meetings about the consequences of the Chernobyl accident. Additional globally conducted studies also confirmed his words, demonstrating that stress was indeed a powerful immunosuppressive factor.

It was then when Georhy Mykolayovych made the decision to conduct epidemiological visits/assessment trips by the laboratory of the Institute of Urology to the places where most of the Chernobyl accident liquidators lived in order to monitor their health for several years in a row. As such, for three years and at his own risk, he and his staff traveled to Chernihiv and the surrounding areas just to do so.

Since the end of 1984, in addition to the described events, Georhy Mykolayovych had collaborated with the Institute of Molecular Biology and Genetics (IMBIG), and in particular with academician V. Kordyum, - the creator of the Ukrainian interferon. Upon V. Kordyum’s request, studies investigating the immunotropic properties of interferon began in G.M. Drannik's laboratory in the Institute of Urology.

At the end of February of 1987, after Georhiy Mykolayovych's first trip to Chernihiv for health assessment of liquidators of the Chernobyl accident, he received a call from academician Matsuka G. H., the Director of IMBIG, asking for a meeting. The meeting was held at the Institute of Urology. In addition to Drannik G.M., the meeting was attended by Matsuka G.Kh., Kordyum V.A., Zhovtovsky N.V. – the Deputy Director of the Scientific Work at IMBIG, Belarus’s representative and collaborator with IMBIG, and Senyuk O. F. - Junior Researcher at G.M. Drannik’s Laboratory, who supervised the studies with interferon.

After sharing everyone’s initial impressions about the events following the accident and discussing the possible role and place of interferon in clinical practice, Matsuka G. Kh informed everyone about the upcoming formal meeting with academician B.E. Paton in March, where he, as a Director of IMBIG, would be requesting funding for the continued research on interferon. G. M. Drannik then realized that that opportunity could not be missed and informed Matsuka G. Kh that, from his side, he would be asking Boris Yevgenovich Paton to support the development of clinical immunology in Ukraine, because interferon was only a separate part of clinical immunology as a field of practical health care. After a short discussion, everyone agreed that his proposal was a correct plan of action and Georhy Mykolayovych was asked to prepare a speech.

The formal meeting at the National Academy of Sciences took place on March 17, 1987. As a result of that meeting, a Ukrainian Center for Clinical Immunology was created for the development of the corresponding program in Ukraine, as well as for continued investigations of immunotropic properties of interferon. Three months later, in July of 1987, the Order on the establishment of the Republican Interagency Research Center for Clinical Immunology was released by the National Academy of Sciences of Ukraine and the Ministry of Health of Ukraine, and G.M. Drannik was appointed as a Director of this Center.

Accompanied by a strenuous and complex work, the development of a Republican Program of Clinical Immunology in the practical healthcare of Ukraine had begun. Guidelines and objectives with research plans for the Center were developed. During that work, it was found that every third Ukrainian was suffering from secondary immunodeficiency. Research studies conducted in Kiev in 1989 revealed that 700 out of 1,000 surveyed presumably healthy Kiev residents complained of symptoms that were the base of increased fatigability syndrome and immune dysfunction.

The results of the assessment trips to 5 regions of Ukraine in 1992 demonstrated that not only residents of Kiev suffered from secondary immunodeficiency. This presented a serious risk for virtually healthy people, because later this immunodeficiency could manifest through viral or bacterial infection, through cancer or autoimmune disorder.

During these years, the Clinical Immunology Program led by G. M. Drannik was not only established, but also implemented in the practical healthcare. This was largely due to the fact that in 1993, the Ministry of Health of Ukraine approved new medical specialties for practical health care: "Clinical Immunologist" and "Laboratory Immunologist". The program "Protection and Rehabilitation of the Immune System of the Population of Ukraine", which in 1992 won the competition among programs of the State Committee for Science and Technology (SCST), played a significant role in this process.

In 1995, the WAK (Higher Attestation Commission) discipline - "clinical immunology" - was approved. G.M. Drannik actively participated in the creation of a scientific school of immunologists: under his leadership, 11 doctoral and 31 candidate (PhD) theses dissertations on various topics of clinical and laboratory immunology were completed and defended.

In 2000, under the leadership of G.M. Drannik, the Ukrainian Society of Specialists in Immunology, Allergology and Immunorehabilitation became a collective member of the European Academy of Allergology and Clinical Immunology.

Prof. G.M. Drannik paid great attention to the issues of teaching and continuing medical (professional) education. He became the founder and the first Head (since 1994) of the Department of Clinical Immunology and Allergology with a course in Pediatric Clinical Immunology and Medical Genetics at the OO Bogomolets National Medical University. Especially in the first years of creation of the Department, Georhy Mykolayovych devoted a lot of attention to training teaching staff, to creating clinical bases and filling them with necessary equipment, which was all very necessary for providing adequate teaching, research and medical activity at the Department.

Under his leadership, first programs for teaching the discipline were prepared and are constantly being updated. The first textbooks (1999, 2003, 2006, 2010) and the first textbook in the state language (2006) were written. Since 1997, as the Head of the headquarter Department, he has been directly involved in the creation of Departments and Courses of Clinical Immunology and Allergology in almost all higher medical educational institutions of Ukraine.

Since 1987, he has prepared and conducted: 2 National Congresses, 25 All-Ukrainian Conferences and 4 International Scientific-Practical Conferences on Topical Issues in Clinical Immunology and Allergology, 7 Symposia on Immune Pathogenesis, Diagnosis and Treatment of Chlamydia and TORCH-Infections. Of particular significance was the International Summer School (Kyiv, Crimea) that was organized and conducted with Georgiy Mykolayovych’s initiative and leadership in 2002 in Ukraine and under the auspices of the European Academy of Allergology and Clinical Immunology, as well as the Institute of Immunology of New England (Director L. Dubaski). During that International Summer School, young allergy-immunology specialists received lectures from more than 20 professors from around the world.
Regional seminars are also being held regularly to provide lectures on current issues in Immunology and Allergology.

In 2012, remaining a Professor at the Department, Georhy Mykolayovych stepped down from being the Head of the Department and transferred his duties to his student - Doctor of Medical Sciences, Professor Kurchenko Andriy Igorovich.

Today, G.M. Drannik is a Doctor of Medical Sciences, Professor, Head of the Immunology Laboratory of the State Institute of Urology of the National Academy of Medical Sciences of Ukraine, Professor of the Department of Clinical Immunology and Allergology with the Course of Pediatric Immunology and Medical Genetics of the National Medical University O.O. Bogomolets, the author of 1 textbook (which was reprinted 4 times, in 2003 - reprinted in the Russian Federation) and 4 textbooks, 15 monographs, the author of the book "Introduction to Clinical Immunology", dedicated to the 100th anniversary of I.I. Mechnikov, the author of more than 800 published research articles, the author of 10 patents and 10 copyright certificates. Under his leadership, 31 Candidate (PhD) and 11 Doctoral theses dissertations have been completed and defended. He is a member of the Editorial Board of many national journals, an Honorary President of the Ukrainian Society of Specialists in Immunology, Allergology and Immunorehabilitation, an Editor-in-Chief of the Journal "Immunology and Allergology. Science and Practice, a Member of the American College of Allergy, Asthma and Immunology, and a Member of the European Academy of Allergy and Clinical Immunology.